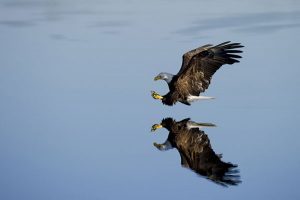 A Black Canyon kayak trip is an excellent way to observe wild animals in their natural habitat. If you’re a bird lover, you’ll find plenty of feathered friends to keep you enthralled on your journey. Unlike some animals that steer clear of the towering heights of the canyons, birds aren’t limited by the landscape and easily dive in and out while enjoying the river below. These are just a few of the species you may encounter on your tour.

Prevalent on night tours, the horned owl swoops in to hunt small rodents and rabbits that feed on berries from small bushes and trees along the canyon rim. They are year-round residents, so there’s always a good chance to spot one. If you listen close, you can hear their hooting sounds coming from the trees and cliffs.

Preying on small flying birds, the peregrine falcon dives down from the canyon walls at speeds of over 200 miles per hour. These falcon-like birds can have a wingspan of almost four feet in length, which is quite majestic if you are lucky enough to see one.

One of the most sought-after birds on any type of wildlife expedition is the bald eagle. As the US National bird, the eagle is highly recognizable. A single eagle may have two or three nests within a few miles from one another, and they return to the same nests year-after-year.

Also referred to as the mud hen, the coot has shiny black plumage with white faces and can be seen floating in groups along the open water. They also tend to mix in with ducks and like eating any type of aquatic plant. On land, the birds are quite clumsy and comical and require a long running start to get airborne.

The sweet and haunting singing you hear coming from the canyon walls are probably the voices of these small but predominant birds. Often heard before they are seen, the wren is a small brown bird with a white chest and long bill. It feeds along narrow rock crevices and is often considered one of the most remarkable songbirds of the west.

You’re sure to encounter many more species of ducks, sparrows, bluebirds and a multitude of other songbirds along your Black Canyon kayak trip. When planning your excursion, familiarize yourself with some of the resident birds and note the best time to view them to help maximize your enjoyment. Book a kayak tour with Blazin’ Paddles today!