Facts About the Hoover Dam that You Didn’t Know 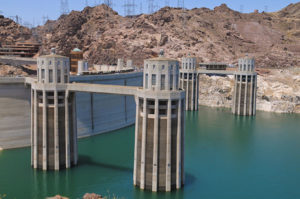 If you’ve ever been kayaking or dream of kayaking near the Hoover Dam, you know what an awe-inspiring structure this engineering marvel is. Full of mystery and intrigue, the dam attracts approximately a million visitors every year. Aside from being the world’s largest source of hydroelectric power, consider these Hoover Dam facts that you may not know.

Construction of the dam started in 1931 and lasted for five years.

It took a team of more than 10,000 people to construct the dam. Miles of streets were paved and buildings were constructed to accommodate these workers and their families. Thus, the community of Boulder City was born and is still standing today.

The great arch of the dam contains 3.25 million cubic yards of concrete and the power plant and additional facilities contain 1.11 million cubic yards. This is enough concrete to build a full-sized highway from one end of the United States to the other.

The power generated by the dam supports Nevada, Arizona, and California. It produces approximately 4.2 billion kilowatt hours of electricity per year.

The Hoover Dam forms the Lake Mead reservoir, which is the largest reservoir by volume in the United States.

The dam was named after the wildly unpopular President Herbert Hoover during a publicity stunt. Secretary of the Interior Wilbur traveled to the area in 1930 to the official opening of the project and gave the structure its name. His successor changed the name to the Boulder Dam in 1933. In 1947, President Truman changed the name back to the Hoover Dam, stating Hoover was the one who brought the project to life.

Today, one of the most important of the Hoover dam facts is the dam helps minimize the risk of floods in the area, helps with irrigation of crops, provides water for nearby cities and towns and serves as a recreational area for boating, fishing, kayaking and other water sports.