Awesome Birds You May See in When Kayaking the Black Canyon 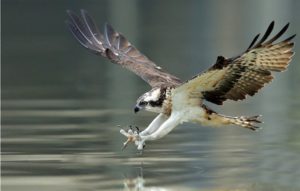 The Black Canyon is a paradise for a variety of wildlife, including some amazing bird species. When kayaking the Black Canyon, there are five species you are likely to see while on your trip.

Also referred to as the duck hawk, the Peregrine Falcon is a majestic blue-gray bird with an impressive wingspan of up to four feet in length and a flying speed of up to 240 miles per hour. They like to sit high in the cliffs and dive down swiftly to catch their prey.

Contrary to their name, bald eagles aren’t actually bald. In fact, they have a thick plumage of white features on top of their heads. Young bald eagles have mostly brown heads. When flying, they emit a high-pitched giggle or a slight scream. Eagles are easily noted spotted by their wingspan in flight, which creates a straight line.

The cactus wren is a small bird with a white stripe located behind each eye. They are mostly spotted with dark brown and black feathers, and they typically live in the foothills and other low-lying areas. They enjoy meals of fruit pulp, seeds, and small insects, and they make a sound similar to a car trying to start.

At first, you may mistake the coot for a duck as it floats lazily on the water. These dark grey birds have a white bill and are commonly known as the mud hen. They tend to gather in flocks, and they make a funny grunting or croaking noise as they take off in flight.

The Osprey is sometimes referred to as a seahawk. They like to dive into the water to catch fish. They may also prey on rabbits and small reptiles. Ospreys make high-pitched whistling noises or a series of chirps to communicate. Although similar to a bald eagle, the Osprey has a much larger beak and a smaller wingspan.

To experience these spectacular birds and other creatures, schedule a trip kayaking the Black Canyon with Blazin’ Paddles. Sign up online!