A Tour of the Fish Hatchery 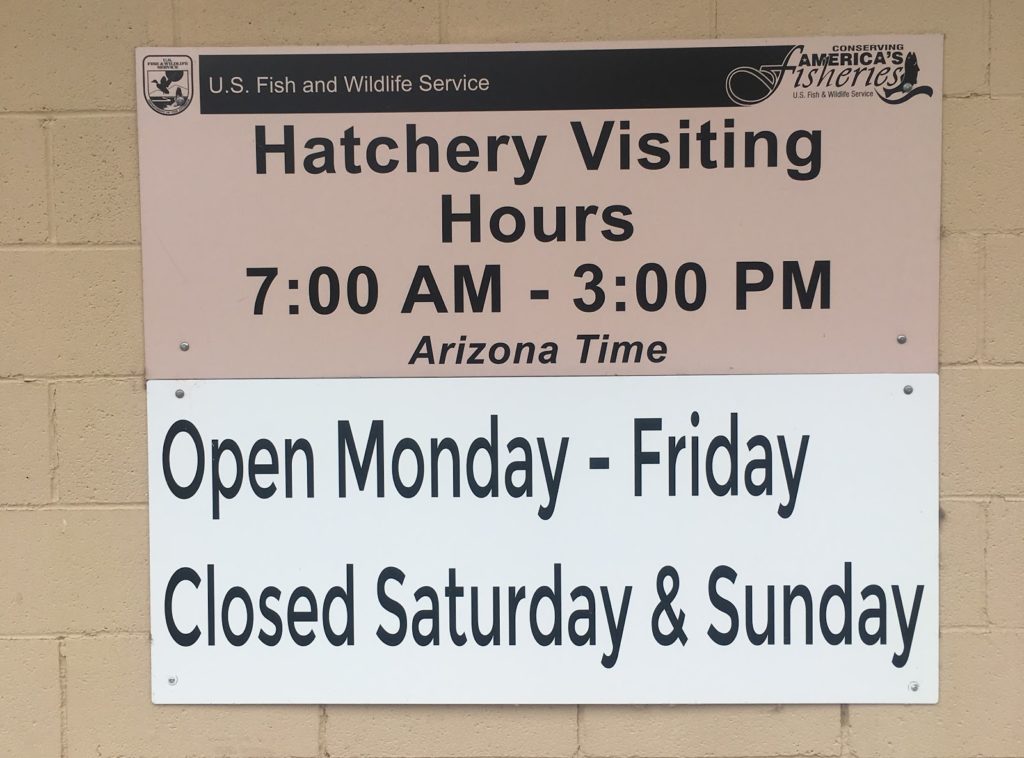 Just north of Willow Beach Marina is the Willow Beach National Fish Hatchery which first opened in 1962. The hatchery is both ecologically and recreationally significant because of the fish that are raised and stocked. Here is an up close and personal tour of everything you can’t see from your kayak!

Self-guided tours are free and open to the public on weekdays.

There are three fish that are raised here at the hatchery. Rainbow trout are primarily for anglers, and the endangered Bonytail Chub and Razorback Suckers are part of the Lower Colorado River Multi-Species Conservation Program. Both populations were severely affected when the dams were built.

Your tour begins as you enter through the Visitor’s Gate. You will notice the shaded awnings to protect the fish and water from extreme desert sun. These awnings also support the solar panels, which were part of a 2010 rehabilitation effort. 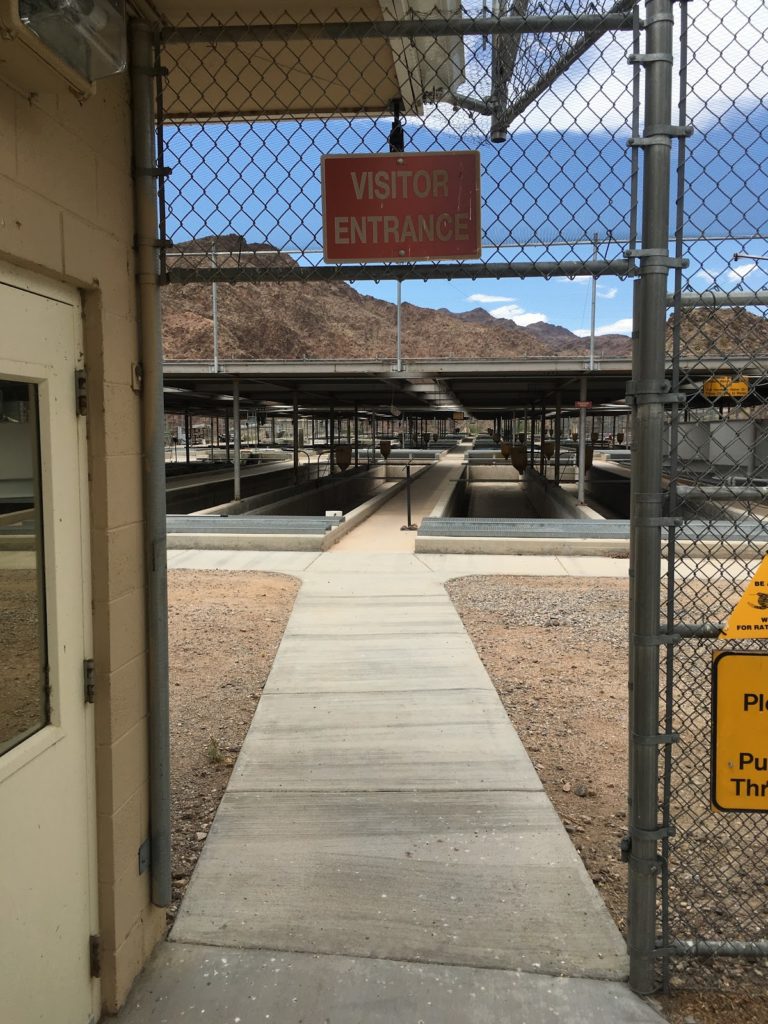 From the fence if you look out over the Colorado River you will see the pumping station. This provides a constant source of fresh river water to the hatchery. While on tour, we pass right by the pumping station but when focused on the scenery and wildlife it’s easy to miss. Rainbow trout and razorbacks need cold water, that’s why Willow Beach is an ideal location for the hatchery because the water that passes through the dam from the depths of Lake Mead is a chilly 52 degrees all year! 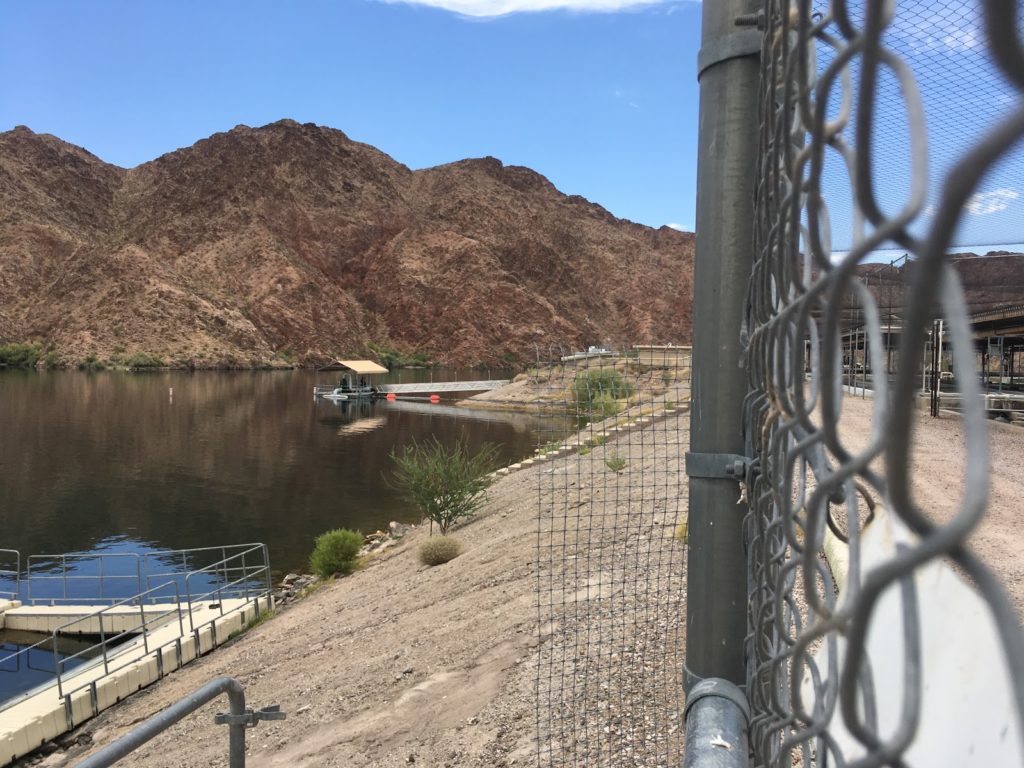 The long troughs that contain the fish are called “raceways.” Fresh water is continuously circulated through the raceways to ensure that the temperature does not rise due to stangancy. Fish remain with others of the same size for up to 12 months as they grow before release. Staff and volunteers make sure the raceways are drained and cleaned adequately to prevent the buildup of harmful ammonia.

In some of the raceways you will see what looks like a million pieces of pasta. These are called bio-balls and are another type of filtration that help generate healthy bacteria to reduce the ammonia buildup from fish waste and leftover feed. Toxicity is reduced by the conversion of ammonia into nitrites and nitrates. Don’t worry, the bio-balls are in a separate area from the fish! 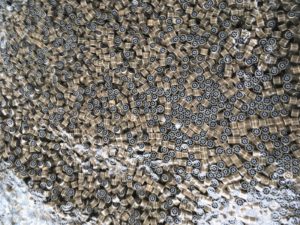 Here are some mature rainbows in the raceway, almost ready for release into the Colorado River! Rainbow Trout are hatched on site with fresh eggs that are overnight shipped four times a year from the Ennis National Fish Hatchery in Montana. They grow up to 12 inches in a year. 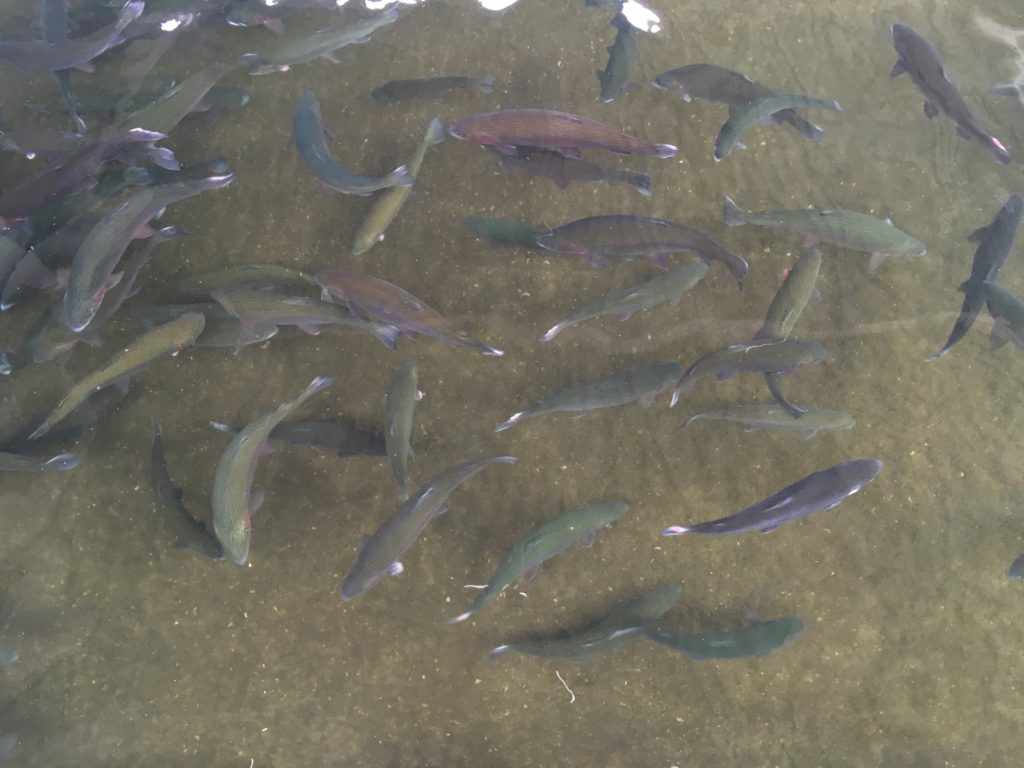 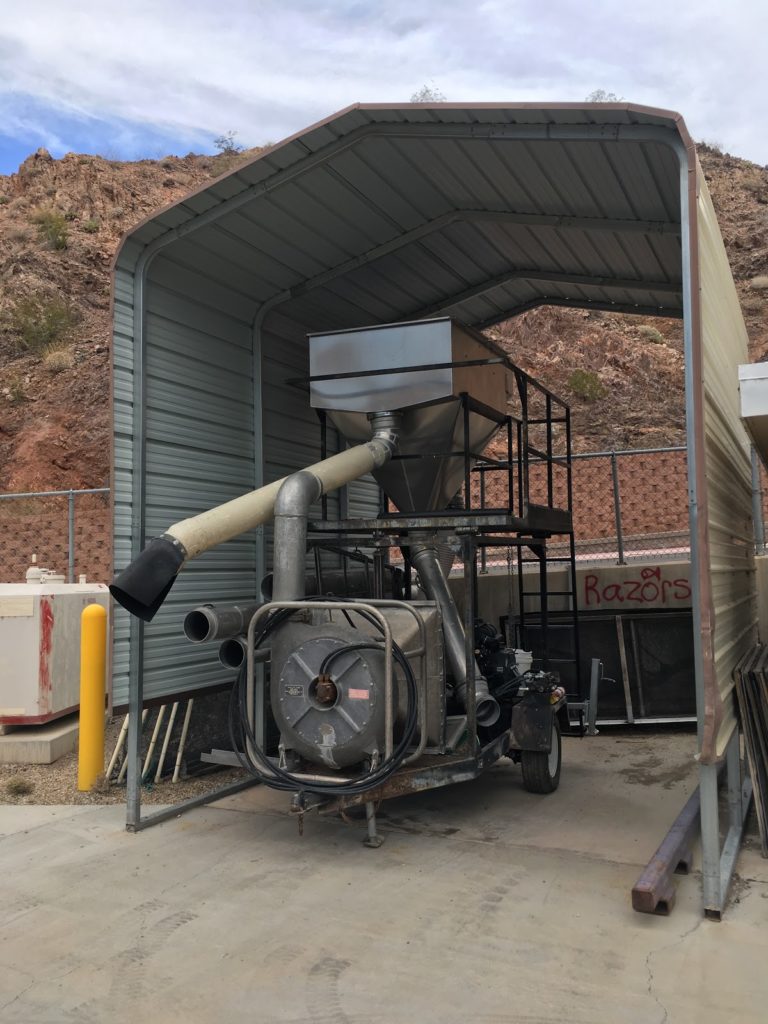 The last and final step in the hatchery cycle is the release! Every Friday morning, weather and holidays permitting, 1,000 trout are released at Willow Beach for fishing. The stock site used to be the Paddlecraft Beach where our kayaks are launched (which explains why the bald eagles love to perch above this beach), but it became too shallow with the changing shape of the river and unsafe for the fish. Now, they are released at the paved boat ramp beside the marina.

Hopefully you have enjoyed the tour…now pick up a fishing license and drop a line!