Things You May Not Know About the Hoover Dam

The Hoover Dam is one of the country’s most iconic and historic sites. Unlike many popular landmarks in the US, there are actually several different ways to experience the Hoover Dam, including a Vegas kayak tour. Whether you go solo or with friends on Las Vegas activities such as kayaking, you’ll learn that there is much more to the iconic dam than many of your friends, peers, and family members even know.

What’s So Special About The Hoover Dam?

The Hoover Dam is a feat of engineering. The dam was constructed during the Great Depression between 1931 and 1936. The dam has a massive volume of 3,250,000 cubic yards. It is designed to perform various tasks, from controlling floods to providing a source of irrigation water and supplying the local communities with hydroelectric power. The project was authorized by Congress in 1928, and it was dedicated by then-president Franklin D. Roosevelt in 1935. At a time when jobs were scarce, and the national economy was in a precarious situation, the Hoover Dam’s construction gave temporary jobs to thousands of workers. The Hoover Dam was turned over from private ownership to the federal government on March 1, 1936.

Did you know that the Hoover Dam had a mascot? The dam’s one and only mascot over the years is a puppy. The puppy mascot is based on an actual puppy that appeared one day at the dam’s construction site. The dog followed the construction workers around and frequently wandered around the work areas. The dog was tragically killed on February 21, 1941, when he was hit by a truck. The Hoover Dam workers buried their beloved dog that day and established a grave site in his honor.

If you are afraid of heights, you might want to avoid the Mike O’Callaghan-Pat Tillman Memorial Bridge, one of the country’s tallest bridges. In fact, it is the nation’s second-highest bridge, only to the Rio Grande Gorge Bridge in New Mexico. However, this Hoover Dam secret is worth the trip if heights don’t bother you. The Memorial Bridge is steeped in history and offers some of the most spectacular views for kayaking in Vegas. The bridge sits about 900 feet over the Colorado River and can also be subject to strong winds.

One of the most unique (and, for some, terrifying) facts about the Hoover Dam is that it was constructed with a unique slope. Depending on the angle that you are looking down on the dam from, it can be easy or difficult to see the unique and treacherous slope of the dam along the canyon walls. If you stand close enough to the edge, you may think the dam’s walls have a concave appearance. While it may be unnerving to see the dam’s walls slope inward in a concave fashion, knowing a bit more about the practicality of the design can help. The concave design helps to contain the reservoir that flows through the Colorado River. It also ensures that the water flows vertically, which then sends debris, such as loose trash and water, vertically into the air.

Creation of a City

At the time it was built, the Hoover Dam was such a remarkable feat of engineering and a crucial jobs creation machine that an entire city was constructed just to house and satiate the workers working on the Hoover Dam. The city that was built for the workers was called Boulder City, which is located in Nevada. Boulder City was built to house about 5,000 workers. Before Boulder City was created, many construction workers living on the lands near Hoover Dam were looking for a place to stay. Boulder City was a welcome solution for those looking to find housing in the area and was conveniently close to the construction site. Boulder City was eventually turned over to the federal government, and the US Bureau of Reclamation ultimately owned it. After the city’s formation, the Boulder Dam Hotel was constructed to house workers and visiting tourists, including world-famous celebrities. The city was returned to the federal government’s control in the 1930s.

The Hoover Dam contains an impressive amount of water, which makes it perhaps not entirely surprising that the dam is home to the largest reservoir in the US. The reservoir by the Hoover Dam is adjacent to Lake Mead, another one of the top Las Vegas activities you can participate in with the family, and another place you can reach by kayak. Kayaking in Vegas will bring you to the heart of the action in Lake Mead, characterized by boater-friendly waters, clear skies, and incredible scenery.

At one point in time, the 1930s to be precise, the Hoover Dam was the tallest in the world. Today, the dam is still one of the largest in the US and the world. It is second in height only to the Oroville Dam, located in northern California. The Oroville Dam stands at a maximum height of 770 feet, and the Hoover Dam stands at 726.4 feet. For comparison, the tallest dam in the world is the Jingping-I Dam located in Liangshan, China. The dam is a relatively new dam that just came into operation in 2013. While it may not be the tallest dam in the world anymore, the Hoover dam is still one of the largest hydroelectric stations. The dam produces four billion kilowatt-hours (kWh) of power each year for homes and businesses across Arizona, Nevada, and California. The dam’s hydroelectric power output rivals that of the Three Gorges Dam in China, which started to produce power in 2003 and was fully functional about one decade later.

There are many magical elements and qualities to the Hoover Dam. One of the best ways to see the dam is through a Vegas kayak tour, which you can arrange through Blazin’ Paddles. Contact our friendly and helpful staff today to learn more about kayaking and other outdoor activities in Las Vegas. 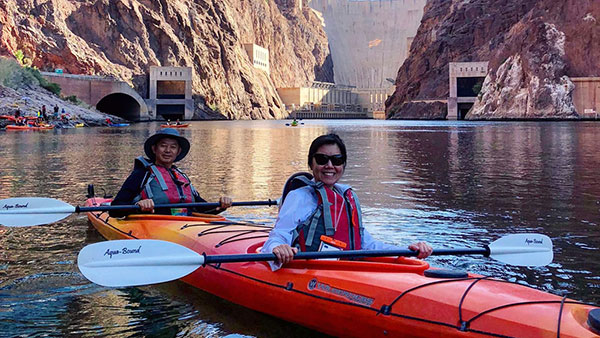