Hoover Dam was the largest dam in the world at the time of its completion in 1935. The dam created Lake Mead, the nation’s largest reservoir, which covers about 248 sq. miles and is capable of holding 28.9 million acre-feet of water. After construction of the dam, it took about 6 years for the lake to fill up. But right now, Lake Mead is at the lowest level it has ever been since the Hoover Dam was constructed. It is at 41% of its full capacity.

The May 2016 water level of Lake Mead was 1073.80 ft. At 1075 ft., the Bureau of Reclamation declared a level 1 water shortage declaration and if it stays below 1075 ft at the end of the year, the Bureau will step in and force the seven states that are part of the Colorado River pact to enact emergency water saving measures. If Lake Mead ever falls to 1025 ft. the Department of the Interior will take control of Lake Mead’s management and water allocation. At 950 ft. no water will be passing through the turbines. This “dead pool” level used to be assessed at 1050 ft., but investment in new turbines has allowed the Bureau of Reclamation to re-assess that lower level by 100ft. 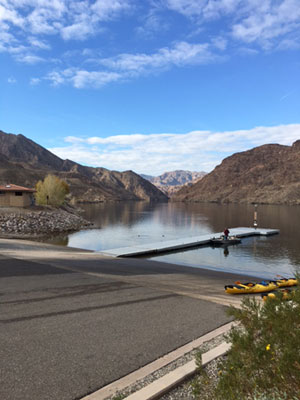 About 96% of the water in Lake Mead once fell as snow in Colorado, Utah, New Mexico and Wyoming. However, we’re 16 years into supposedly the worst drought in 500 years. This has resulted in a drop in the water level of over 130 ft. during those 16 years. Although the amount of water Lake Mead receives each year varies, the amount of water released does not vary much from year to year. Lake Mead is at its highest levels in the late fall and early spring months. Although the level of the lake is expected to continue to fall during the summer, by the end of 2016 the lake is expected to return to at least 1078 ft. to avoid a formal water shortage declaration.

According to the Colorado River Compact of 1922, California has senior rights to the river. Therefore Nevada and Arizona are the first ones to take water allocation cuts in times of drought. On the other hand, electricity costs from Hoover Dam are some of the most inexpensive in the country. Since the capital costs of the dam were paid off years ago, electricity is only 1.83 cents per kilowatt-hour. The maximum amount of power the dam is capable of producing is down 30% from when the lake was full and for every foot that Lake Mead drops, generating capacity is reduced by another 5-6 megawatts.

Natural cycle, water politics or one-way trip? We’d love to hear your comments, feedback and ideas during one of our tours. Book with us and start a discussion!