Kayaking in the Black Canyon

This article was originally published at curiousadventurer.blogspot.com.

The weekend prior had a scorching high of about 109 degrees. But on this day, the weather was on point. What a great day to kayak! 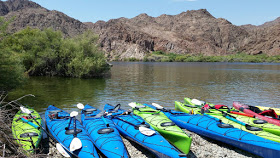 It was an excellent day to kayak with Blazin Paddles. 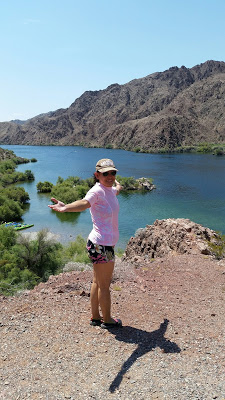 I invited my stepson, Trevor, and our family friend, David, to join me in this adventure. Ever since I showed Blazin Paddles’ Facebook pictures to Trevor, he was all gung-ho about going. He was even more excited that Blazin Paddles’ headquarters was close to a Roberto’s Taco Shop. We made a pit stop there, where he and David each chowed down a breakfast burrito before heading out to the tour. 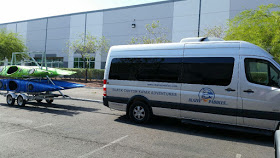 This was our sweet ride to the launch area at Willow Beach. 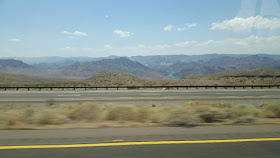 From Boulder Highway, en route to our destination, we could already see a hint of the water.

We reached the launch area at Willow Beach Marina after a 40-minute shuttle ride from Blazin Paddles’ Henderson office. Ryan Borup, the owner of Blazin Paddles, explained that we were on the Arizona side of the Colorado River a few miles downstream from Hoover Dam.

While Ryan prepped the kayaks, we had time to walk around the marina, use the facilities, and visit the sundry shop for last-minute essentials. There were a few families already picnicking nearby and just kicking back. 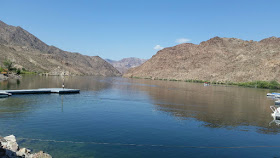 Our kayaking playground for the day 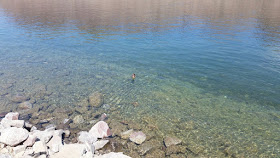 This duck was already having a grand time in the crisp and clear water.

The water was so inviting! It was clear and so was the sky that framed it. From a distance, we could see only a handful of adventurers and a family of ducks that already beat us to the water.

Getting ready to launch, we approached the bright colored kayaks already lined up on the shore. Each was already equipped with a paddle, a life jacket, and…a water gun! A sure sign of more fun things to expect. 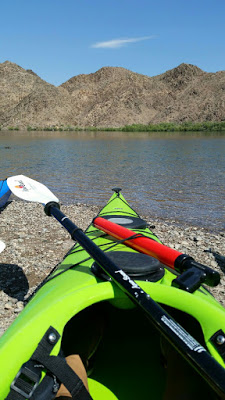 Also on the front of each kayak was a water gun strapped onto the bungee cords.

Ryan, assisted by companion guide Jackie, instructed us to put on our life jackets. Safety first! He followed that up with quick tips on how to get in and out of the kayak without tipping over. Then he demonstrated how to properly hold the paddle and effectively maneuver the vessel. 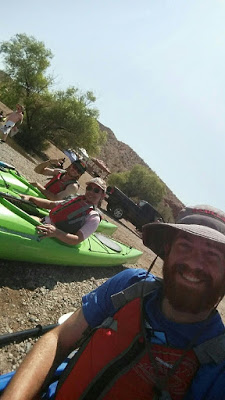 Excited to launch. Let’s do this!

I quickly loaded my snacks inside the rear storage compartment of my chosen kayak. Then I tucked away my iPhone, protected inside a ziplock bag, in the small hatch in front of the cockpit. Before long, we were off.

I chatted with Ryan as we leisurely paddled to our first destination. He grew up in Alaska where his father was stationed while in the military service. That explains his love of the outdoors and how he was somehow led to this business.

Meanwhile, Trevor behind me asked, “Um, is there a better way to paddle? I seem to be all over the place.”

“That could mean your one arm is stronger than the other,” Ryan replied as he gave him advice on how to make adjustments.

Later, when I lagged behind, I chuckled as I watched him zig-zagging ahead of me. 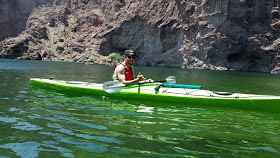 After a few adjustments, Trevor got the hang of it and was kayaking like a pro.

Along with three other guys in our group, we went for a short uphill hike to explore the location. We had to take pictures of the gorgeous view of the Black Canyon from up there. 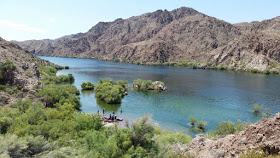 Gorgeous view of our kayaking location. 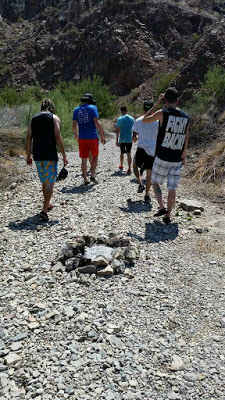 Our group walking past a fire pit as we made a short uphill hike. 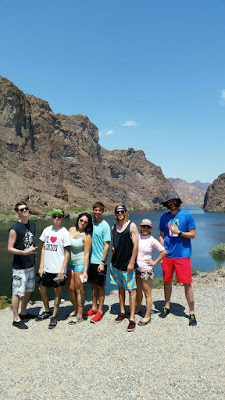 Our group photo with Black Canyon as our backdrop

Ryan is very knowledgeable about the history of the area. Throughout the tour, he showed us some interesting sites and told us fascinating facts. He emphasized that the water here remains 55 degrees year-round. During our second stop, we bravely took a hasty dip in the freezing water. It was refreshing but I could feel my hands going numb.

It was in this spot that I noticed an old-fashioned wooden cart suspended on cables. I also saw a make shift trail that ribboned along the canyon edge. On the opposite canyon wall, there was an outpost with ladder accessibility.

Apparently, these intriguing structures were part of an old gauging station. There were several used during the construction of Hoover Dam. Back then, a gauger would walk along the trail to get on the cart. Then using the cables, he would pull himself to the measuring station and monitor water levels. As part of the tour, Ryan showed us remnants of a river gauger’s house nearby. It’s incredible to see these remains from the 1930’s. 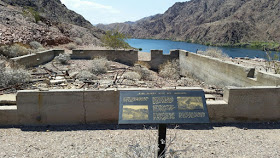 What remains of a 1930’s river gauger’s house

One highlight of our tour was when we all backed into Emerald Cave one at a time and created a sardine-like formation inside. We gazed in amazement at the emerald green water in front of us. 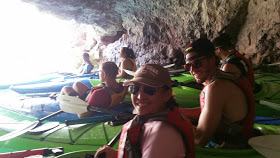 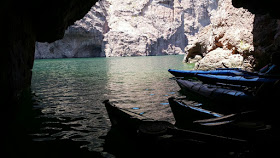 When the sunlight hits the water, it reflects back hues of emerald green. 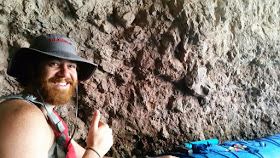 “Awesome!” David gave it a big thumbs up.

On our way back, it was so relaxing to just paddle away. I liked it best when there weren’t any boats or jet skis speeding by. It was nice to enjoy our surroundings with peace and quiet. Both Ryan and Jackie said that they typically spot bighorn sheep around here. But they camouflage so well that sometimes you don’t easily see them.

During the home stretch, we hit some wind. That sure tested my endurance. I felt like I grew some muscles because I powered through it. Though snacks were provided during the tour, I was ready for my packed sandwiches by the time we got back. We all agreed it was a great time and that we want to return and do it all over again! 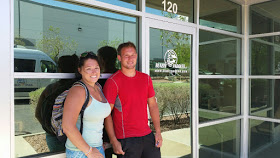 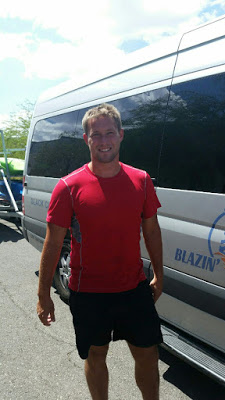 What to Wear:
Swimsuits, water tees and shorts, hat, water shoes or closed toe shoes (You will get wet.)
Don’t forget to put on sunscreen.

What to Bring:
Some snacks and water will be provided. You are welcome to bring additional snacks and drinks.

Getting There:
Although locals can meet at their Henderson Office, they do pick-up/drop off on the Strip.

Other Tips:
Make sure you are physically fit to join the kayaking tour. Though not necessary, it may be helpful to watch a video on how to kayak properly. Then you’re all set!