Every Blazin’ Paddles kayaking tour passes various points of interest along the Colorado River to enjoy the views and learn local history. One of those stops is the Gauging Station, which is listed on the National Register of Historic Places. Here are some interesting facts so you can already be in-the-know for your next tour!

The station was completed in 1935

After Hoover Dam was built, a gauging station was needed to measure the flow of the river downstream. The site, which is just over two miles north of Willow Beach, was selected in 1931 by the United States Geological Survey and the Bureau of Reclamation. Construction started in 1934 and wrapped up in July, 1935 to ensure completion before the dedication of the dam on September 30, 1935. 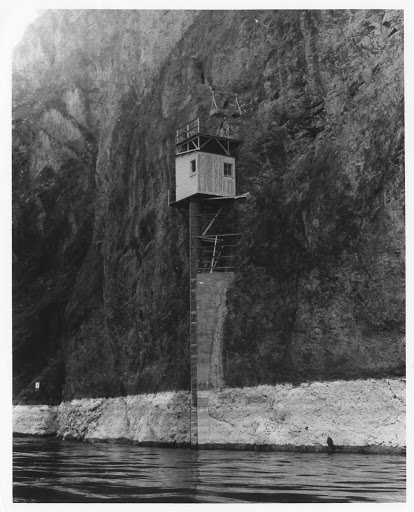 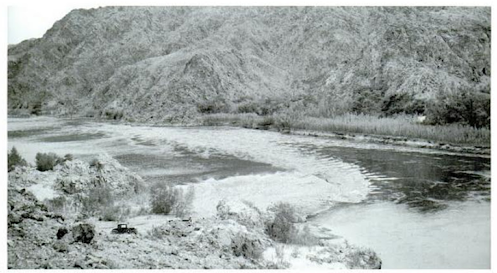 A hydrographer is someone that studies the physical features of water. Two engineers shared hydrography responsibilities and lived at the nearby homesite on the Arizona side from 1935 until October 1939 when a gauging station was built upstream closer to the dam. Their job was to measure various aspects of the water including flow, depth, temperature, and silt content. This data was crucial in fulfilling the primary purpose of the dam: flood control. Your Blazin’ Paddles tour will take you on a quick hike to the remains of the cabin. Look closely and you can see the old Model T at the beach below the site!

In order to collect data the river gaugers, W.L. Heckler and W.E. Dail, would follow a trail a mile upstream, cross over a cove in a hand-operated cable car, follow a cliffside catwalk high above the water, and then complete the journey on another cable car that crossed the entire river to access the gauging station on the Nevada side. These impressive infrastructures are mostly still intact and you’ll see them on tour!

The mystery of the second gauging station

Historical documents tell us that there was a second, downstream gauging station on the Nevada side with another accompanying cable car across the river. However, the second station no longer exists. Help us piece together history by looking for clues along the tour as to where the second station once was perched! 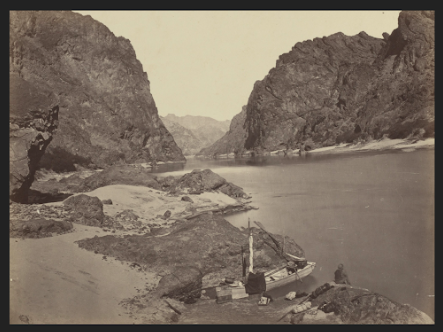 Between 1871 and 1874, a series of surveying journeys known as the Wheeler Expeditions set out with the ambitious goal of mapping the American frontier west of the 100th meridian. Accompanying Lt. George Wheeler was a young photographer named Timothy O’Sullivan who captured the first pictures of the west. In their upstream journey from Needles, California to Diamond Creek in the Grand Canyon they capsized near what would later be the site of the gauger’s house just before entering the Black Canyon. We enjoy calm conditions today but prior to the dams, the river was treacherous. Less than 300 photo negatives survived including this one of the ship wreckage and a crew member pondering the journey. It is believed to be the first ever photograph of the Black Canyon.

The Ribbon of Green, Changes in Vegetation in the Southwestern United States