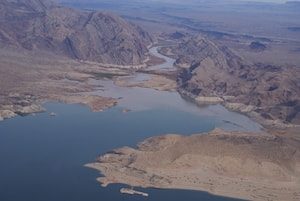 The Mojave Desert stretches across portions of four different states including Nevada, Arizona, Utah, and California. It is the smallest and driest desert in North America and yet it covers approximately 30 million acres of land. When kayaking the Colorado River, you’ll encounter some desert regions, so it’s a good idea to learn a little about it before heading out on your adventure.

The desert only gets about five inches of rain per year. Scientists call the Mojave a rain shadow because the surrounding mountains tend to block out the rain.

There are close to 2,000 species of plants and animals that call the Mojave home, including bobcats, cougars, bighorn sheep, turtles, and snakes. Some of these species are not found anywhere else in the world, including the Joshua Tree and the Mohave Tui Chub. The Joshua Tree is actually not a tree but a water-storing succulent that can grow up to 70 feet in height and live up to 150 years. The Tui Chub is an endangered fish native to San Bernardino.

The Colorado River offers a cool respite from the harsh and hot desert conditions, which makes this the perfect spot for a summer vacation. Visit Blazin’ Paddles’ website to schedule a kayak tour and fulfill your bucket list item of kayaking the Colorado River.